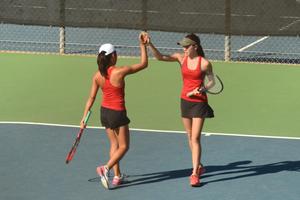 The Girl's JV team improved their overall record to 5 -1 with a 5 -1 win over Peninsula High School. All three singles players, Lily Kresser, Izzy Piccirillo, and Allie Schoeke won their matches by 8-1, 8-3, and 8-1 respectively. The number two doubles team of Zoey Belliveau and Kayla Hirt crushed it winning 8-0. The number one doubles of Kumiko Nagata and Isabella Brannan came back from being down 1-6 to win it 8-6 and the third doubles team of Victoria Moll and Kalina Teshima gave a good fight but lost in a tie-breaker. Great job by all!